Staff Sergeant Gerald (Jerry) Sorensen was born on 31 October 1919 near Blackfoot, Idaho, the son of Luella and Ephraim Sorensen.  When he was in high school, his family moved to Pocatello, Idaho.  Sorensen volunteered for the United States Army Air Force in May of 1942.  While he was stationed at the Amarillo Army Air Base in Texas, he met and married Nora Lee Lewis.

On 1 May 1944, Sgt. Sorensen was serving as the ball turret gunner on a B-17G Flying Fortress named the "Wolverine when it took off at 15.00 on a mission to bomb railway yards at Metz.  It was the crews 2nd mission.  Before reaching the target area, one of the planes engines failed but the pilot was ordered to press on with the mission.  Anti-aircraft fire took out a second engine over the target area, but it successfully bombed its target anyway "with good result.  However, B-17s were not designed to fly on two engines, and as the plane made its way back toward England, it slowly lost altitude.  The pilot ordered all unnecessary items thrown overboard in the hope that they could lighten the plane sufficiently to make it to the Channel.  But this was not enough to keep the plane in the air, and the pilot gave the order to bail out over Belgium. All ten crewmembers survived the bailout.  Sorensen landed near the village of Silly, suffering a twisted ankle.  Sorensen made contact with members of the Belgian Resistance Organization, the Comet Line (see the biography of Robert Garrett.) 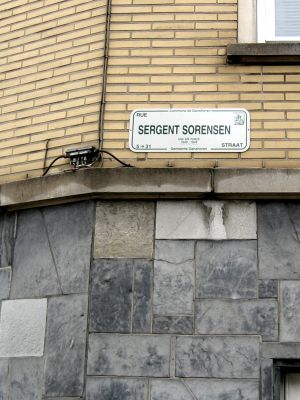 The Comet Line sheltered him in a number of safe houses until bringing him to the home of Arthur Abeels in Ganshoren.   Arthur Abeels was the President of the local veterans association in Ganshoren.  His son Roger was twenty years old, and was a member of the Secret Army, an armed Belgian Resistance organization.  Roger had joined the Secret Army in 1941.  Rogers dream was to become a pilot and go to London to fly with the RAF, as other Belgians had done.  He learned to speak English well.  Although he was never able to go to London, becoming an aviator remained his dream.   Another downed American aviator, Bernard L. (Mac) McManaman, had arrived in the Abeels home the day before Sorensen arrived.  It wasnt long before Roger, Jerry, and Mac became very good friends.  Arthur considered Jerry and Mac as sons, and their daughter Jenny considered them as brothers, despite their teasing her.  Jenny Abeels says that the time Jerry and Mac stayed in her home "were the happiest two months of my life.  Sorensen even picked up some French, and his thick Idaho accent charmed the Abeels family.

Jerry and Mac were members of the Abeels family, and Rogers best friends.  As Jerry and Mac learned more about Rogers activities in the Secret Army, they decided to take up arms along side their friend. In early August, the three young men went to Saint Marcoult, where Jerry and Mac formally joined Zone 1, Sector D of the Secret Army.  They spent the month of August collecting intelligence, sabotaging German operations, and recovering arms and supplies that were parachuted to the Resistance.  Jerry and Macs military training proved helpful for the Secret Army.

On Sunday 3 September 1944, the Nazis were in full retreat across Belgium.  The Secret Army was ordered to attack the German armies and hinder their retreat.  Jerry, Mac, and Roger were assigned to a Secret Army unit that was to take up a position in the village of Marcq-Les-Enghien, where they were to harass any Germans who would be retreating along the main road leading from Ath.  They approached the village on a small road that made a T intersection with the main road from Ath.  Just before this intersection, either Jerrys or Rogers bicycle broke down.  (It is not clear who was riding the bike with the problem.)  Jerry and Roger stopped to fix the bike while Mac and the other five went ahead to take up their planned positions and wait for the Nazis.   As Jerry and Roger were working on the bike, a slow moving German vehicle with officers on board passed by on the main road.  Houses obstructed Jerry and Rogers views of any other traffic on that road.  Jerry and Roger opened fire on the German vehicle without realizing that this was the lead vehicle of a column of an SS company.  The Nazis gave chase, and Jerry and Roger took up a defensive position in a rabbit hutch.  Armed only with their submachine guns, they fought fiercely as the Nazis attacked them.  The Nazis threw a grenade into their position.  The shrapnel struck Jerry in the head and neck, and Roger in the back, killing both young men instantly.  The time of Jerry and Rogers death was 13.30 on that Sunday.  Thirty minutes later, the British army traveled up the same road, liberating the village.

On 10 September 1944, the remains of Jerry and Roger were buried with honors in the community of Ganshorens cemetery.  After the war, the US Army wanted to move Jerrys remains to one of the new American military cemeteries.  However, Jerrys wife and family asked that his body remain undisturbed in the Ganshoren cemetery.  As his father wrote to the War Department in June of 1946, "We feel that he is beside his friend and near the people who gave him a home when he was alone in a foreign land.  After some lengthy paperwork, the familys request to leave Jerrys remains undisturbed was granted in January of 1949. After the war, Nora Lee Sorensen and the Abeels family became friends.

As early as November of 1945, the Abeels family encouraged Nora to visit them in Belgium.  Arthur Abeels wrote to her, "You cant understand, dear Nora, how much we love you.  You are the dear wife of our beloved Jerry.  We have love [sic.] him the first day he came at home.  We have never met a better boy than him.  When he called us Pa and Ma, we were so happy.  Roger and Jerry were like brothers together.  It is for that reason that they stayed together, and they died together.  In January of 1947, Nora Lee Sorensen came to Belgium and stayed with the Abeels family for three months.  She visited her husbands grave often to grieve.  In her honor, the community of Ganshoren held a commemoration service for Sergeant Sorensen on Saturday 8 February, and the community of Marcq-les-Enghien did the same on 27 April.  Sorensen was posthumously decorated with five Belgian military honors, and a street was named after him in Ganshoren.

Nora Lee and Jenny Abeels remained friends for life. As for Mac, he and Jenny stayed in touch after the war and he visited her in Belgium.  When the Korean War broke out, Mac was called to active duty in the Air Force.  He served in Korea as the tail gunner of a B-26C Invader bomber.  While on a night intruder mission, his plane was hit by anti-aircraft fire and crashed.  He is listed as missing in action and presumed dead.  The planed crashed on 2 September 1951, almost exactly seven years after the date that his friends Jerry and Roger were killed.

One member of Sorensens crew wrote the following about him: "Sorensen died because he firmly believed in what we were fighting for.  He would rather fight with the Belgians than to return home in safety.  Only those who knew him can understand this.