Clarence Abair was the son of Mr. & Mrs. Ernest W. Abair of Yale St., Ludlow, Massachusetts.  He graduated from the Ludlow High School in 1940. He entered the service in March of 1943, went overseas in September of that year.  He served with the 487th Port Battalion.  He was a veteran of the Normandy invasion and the battles of France and Belgium.  Clarence died on 16 December 1944, when a V1 German buzz bomb hit the Cinema Rex theater in Antwerp, demolishing the theater.
Information from Ronald Busschers, without supporting documentation. 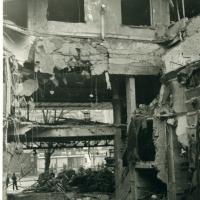