Visit a museum or monument

Whether you live in Belgium or are just visiting, there is much to see and do when it comes to remembering the sacrifice of those who died for the liberation of Europe. Visit one of the many museums that bring the past to life, or explore the countryside for memorials and monuments of interest.

There are dozens of museums dedicated to the First and Second World Wars in Belgium. Below are a few recommendations about museums to visit, or discover a list of monuments and memorials:

The In Flanders Fields Museum is Belgium's largest and most well-known museum from the First World War.  It is located in the center of Ieper.

The battle of Passchendaele raged outside of Ieper from June to November 1917. Over 300,000 soldiers of the British Empire and over 260,000 Germans were casualties of this terrible battle. The Memorial Museum Paesschendaele tells their story in the broader context of the broader history of the fighting around Ieper during WWII.  It includes reconstructed trenches and dugouts to help the visitor "feel" what the war was like for the men who served and died there.  It also includes an "America House" highlighting the American contribution in WWI and an American section in the "poppy garden."

The Museum Hooge Crater is on a site where extensive mine warfare took place. In addition to explaining mine warfare, the museum has an interesting collection of weapons and vehicles from the war, including a German tri-plane.

The Bastogne Barracks is located at the site where General McAullife had his headquarters during the Battle of the Bulge.  You can visit the actual room where the famous Christmas dinner took place, and where McAullife uttered the word "NUTS!".  The site also contains one of the most impressive collections of WWII military vehicles ever assembled.  The site is owned and maintained by the Belgian military.  Visit their website to book a tour!

The 101st Airborn Division Museum is located in a historic building in the center of Bastogne.  It not only tells tells the story of the 101st Airborne Division and the other units that fought in and around Bastogne during the Battle of the Bulge, but it also gives a sense of what life was like for the civilians who lived in their basements while the battle raged above them.

The Baugnez 44 Historical Centre is an excellent commercial museum located near the site of the Nazi Massacre of American POWs in December of 1944 during the Battle of the Bulge. It tells the story of the war from the perspective of both the soldiers and the civilians in Belgium via an informative audio guide. You will learn a lot from visiting this museum. 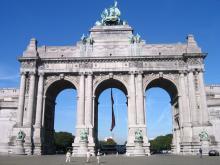