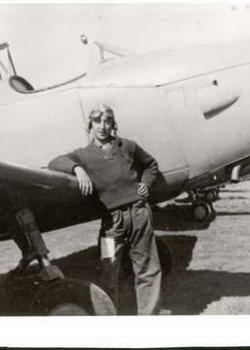 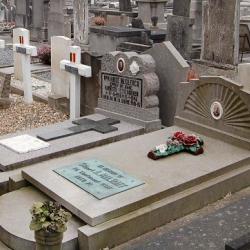 Second Lieutenant Gilbert Malrait was born on 7 July 1919 in Central Falls, Rhode Island, the son of recent European immigrants to America.  His father Albert was from Ronse, Belgium and his mother Anna Ellen (Nellie) were from Blackburn, England.  Albert was a weaver, and the family moved to America from Belgium three months before Gilbert was born.  Gilbert spent his first nine years growing up as a typical American schoolboy, speaking only English at home and at school.  However, for reasons that are not fully clear, Albert and Anna decided to return to Ronse in Belgium in 1928 with Gilbert in tow, and they settled into a house on the Moortelstraat at 134.

Gilberts new start in Belgium was not easy. Shortly after the family returned to Belgium, Gilberts mother died, leaving the nine-year old to be raised by a father on his own.  On top of that, Gilbert had to learn French and Dutch from scratch, at the same time that he was trying to adjust to a new school and make new friends. Yet Gilbert overcame these obstacles with flying colors.  He became an outstanding student.  He excelled in science, and particularly astronomy and geography.  He became popular among his classmates, who nicknamed him "Staf.  He was a founding member of the committee that created his high school yearbook, the "Sphinx.  After he graduated in 1939, Gilbert passed the exams to become an officer in the Belgium navy, and he intended to pursue a military career.  However, Gilbert would never enter the Belgian military.

On 1 September 1939, Nazi Germany invaded Poland.  France and the United Kingdom declared war on Germany, and the Second World War was underway.  Although the major European powers had declared war on each other, there was no significant fighting among them until May of 1940.  Belgium was neutral during this period of the "phony war, but it was evident to Gilberts father (and most other Belgians) that Belgium would sooner or later be drawn into the looming conflict.  Since Gilbert was a native-born American, he could return to America without any problems.  So, Gilberts father decided to send him to America, with the intention that Gilbert would go back to school and continue his studies.  Gilbert left Antwerp on 9 December 1939 on the cargo ship Black Hawk, and he landed in New York twelve days later. From New York, Gilbert went to Pawtucket, Rhode Island where he stayed with his Uncle Dick.  Uncle Dick got Gilbert a job at the Brown & Sharpe Manufacturing Company, where his three daughters (Gladys, Ethel and Gertrude) also worked. However, after Nazi Germany invaded Belgium, Gilbert decided to join the US Army.

He was inducted on 24 October 1940, and was stationed at bases in Massachusetts and Oklahoma before being accepted into the US Army Air Forces Aviation Cadet Program in 1942.  Probably because of his interest in astronomy, geography and science, Gilbert became a navigator, and he was sent to the navigator school at the Selman Army Air Field in Monroe, Louisiana.  In April of 1943, he completed his training and he was commissioned as a Second Lieutenant.Initially, Gilbert was assigned to the 577th Squadron of the 392nd Bomb Group at the Davis-Monthan Field near Tuscon, Arizona.  However, he was soon transferred to the 719th Squadron of the 449th Bomb Group, and moved to the Bruning Air Field in Nebraska. While there, Gilbert was assigned to the crew of Lt. William Thieme on a B-24 Liberator.  During the autumn of 1943, the Thieme crew trained together as a team and prepared for combat on B-24s.  Before shipping to Europe, they were given a new B-24, which Thieme nicknamed the Betty Ann after his wife. In December,

Thiemes crew was sent to the 449th Bomb Groups European base at Grottaglie, near Taranto in Italy.Fortune did not shine upon the Betty Ann on the way to Europe, but it was kind to her crew.  On 15 December 1943, they encountered bad winter weather over North Africa, and the Betty Ann iced-up in flight.  Despite Thiemes best efforts, he could not keep her in the air.  He ordered the crew to bail-out and all of Thiemes crew survived.  However, a guest pilot who was on board did not survive because his parachute failed to open. By the end of the month, the crew had been reunited with the Squadron at their new base in Grottaglie, Italy. However, they would now be flying several different planes. January and February were plagued with bad weather, so the crew did not fly many missions during those months.  Bad luck with the weather struck them again on 30 January 1944.  This time, they were flying the Maui Maid when they encountered wind problems while trying to land.  Thieme was forced to slam on the breaks while landing, causing the Maui Maid to bore its nose into the ground.  However, the crew walked away from the airplane unscathed.  They had survived their second crash.As the weather began to improve, the Thieme crew began to fly more missions, and its range of operations included Southern Germany, Austria, Southern France and Romania.

On 4 April 1944, the luck of the Thieme crew finally ran out.  On that date, they were sent on a mission to attack railway yards near Bucharest, Romania that the Germans were using to move supplies to the Eastern Front.  These railroad yards were strategically important, and the Nazis strongly defended them.  Eighty to one hundred enemy fighters attacked the Squadron as it approached its target. Thiemes plane was on the Squadrons flank, and was repeatedly hit.  The B-24 finally burst into flames, and crashed to the ground near Melete, Romania.  Gilbert and six other members of the crew were killed immediately, while four were able to bail out.  (The bombardier, Francis Beck and gunner Meddie Brouillette are buried at the Ardennes American Cemetery.) The Nazis captured the ones who bailed out, and one of the four died from his wounds a week later.   The next day, the local police recovered the bodies of Gilbert and four other members of the crew.  The bodies were badly burnt, and the Romanians could only identify three of them.  They buried the bodies in a civilian cemetery at Giurgui in Romania.  In September of 1945, the bodies were moved to the American military cemetery at Sinaia.  In December of 1946, the two unknowns were moved to the Ardennes American Cemetery in Belgium, where there was a central identification laboratory.

On 1 December 1949, Gilberts remains were officially identified, and his father was informed of his sons fate.  Albert requested that his son be returned to him in Ronse.  On 20 August1950, Gilbert was brought to Ronse, Belgium.  On Sunday 20 August, a funeral was held in the presence of representatives of the American and Belgian government and military, civil authorities, and, of course, his father.  His father had not seen his son since he left for America ten years before.  Gilbert was laid to rest in a place of honor at the community cemetery at Ronse.  His name is listed on monuments of honor at his school in Ronse, at the memorial for navigators at Selman Field in Louisiana, at the World War II memorial in Providence for the war dead of Rhode Island, and at the war memorial in Central Falls, Rhode Island, his birthplace.

Philippe Vanderdonckt.  Mr. Vanderdonckt is from Ronse, Belgium, and has made preserving the memory of Gilbert Malrait a personal mission.  He has put together an outstanding tribute page to Malrait, which contains much more information about him and the crew than is written above.  Please see  https://www.2ltmalrait-gilbert.be.  Vanderdonckt has allowed this author to draw freely upon the material on that web site for the biography above, and this author is very grateful for his assistance and support for AOMDA.

View all
Ceremony for Gilbert Malrait in Central Falls, RI 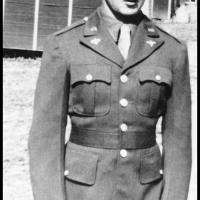 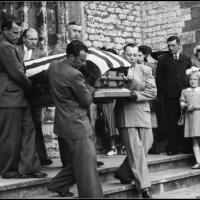 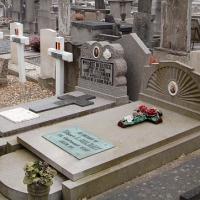 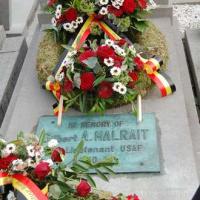