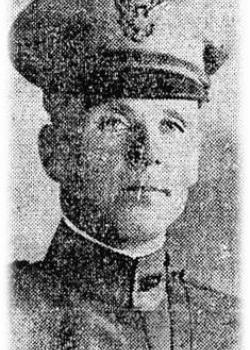 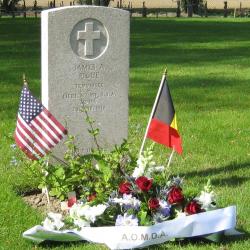 Lt. James A. Pigue was born in 1884, the only son of Edward and Fannie Pigue of Nashville, Tennessee.  Everyone called him Jim, and the family lived at 2017 Belmont Boulevard in Nashville.  They were devoted members of the First Baptist Church.

Jim was a popular young man who always wanted to be a soldier.  He attended the Virginia Military Institute from 1901 to 1902.  In 1904, he joined the US Marine Corps, and was sent to Annapolis for training.  He was one of six men selected from his class at Annapolis for special duty in the construction of the Panama Canal, where he impressed his commanding officers and earned a Panama campaign badge.  A year later, he was ordered back to the states, and was commissioned a Lieutenant.  He spent the next four years in a number of assignments on both land and sea, including duty in the North Atlantic and the Mediterranean, and he was awarded two medals for perfect service.  In 1909, he was honorably discharged from the Marine Corps, and he settled down to civilian life in Nashville.  Sadly, his mother passed away in 1912, leaving Jim and his father living together on their own.

In his heart, Jim was a patriotic man who believed in duty to country. So, when the Mexican border conflict broke out in 1916, he enlisted in the First Tennessee National Guard Regiment, and was quickly promoted to Second Lieutenant.  The Regiment was mustered into federal service, and sent to Texas.  There he was promoted to First Lieutenant, and was awarded two more medals for exemplary service.   While in Texas, Jim also met and married Jane Weller, apparently much to his fathers displeasure.  He returned to Nashville with his Regiment.  He left the service, and again settled down to civilian life with his new wife.  However, civilian life did not last long.

When America declared war on Germany in 1917, Jim rejoined the First Tennessee National Guard, and the regiment was again mustered into federal service.  At first, the regiment was based at Camp Jackson in Nashville.  It was then transferred to Camp Sevier in Greenville, South Carolina. At Camp Sevier, the First Tennessee National Guard became a Heavy Artillery Regiment.  However, Jim preferred infantry service, and he requested a transfer.  He was reassigned to the Third Tennessee National Guard Regiment, which was soon re-designated as the117th Infantry Regiment of the 59th Brigade of the 30th Division. The 30th Division was known as the "Old Hickory Division in honor of President Andrew Jackson from Tennessee.

On 4 May 1918, Jim was shipped to Europe with his regiment, leaving behind forever his newlywed wife and a son who he would never know.  When they arrived in Belgium, the regiment was assigned to the British Second Army near Ieper for training.  The British Second Army was experiencing a shortage of officers at this time.  So, while the enlisted men of the 117th trained, Jim spent some periods of time commanding British and Australian artillery units. On 15 July, he was back at the 117th Regiment and he was placed in command of a battalion.  The next day, his regiment entered the front lines and took over full responsibility for the East Poperinghe Line of trenches.  On 18 July, Jim was at an observation post when a sniper shot him through the heart.  He was the first man from the Old Hickory Division to be killed in action during the First World War.

To all who knew him, Jim Pigue was a gallant officer and a gentleman.  In a letter to his wife six days before his death, Jim wrote, "We all cant be heroes and wear medals and get our names in the dispatches, but we can do our full duty, and wear our medals on our hearts.  Although he disapproved of his sons marriage, Jims father was proud of his son and the fact that "My boys heart was in the service of his country. When news of Jims death reached home, a memorial service was held at the First Baptist Church, which was filled to capacity for the occasion.

Jim was initially buried at the Gwalia British Cemetery, but his body was moved to the "American Plot of the Lijssenthoek Commonwealth War Graves Cemetery in June of 1919.   In the meantime, Jane moved back to Ranger, Texas with her toddler son.  In 1920, the army wrote her to ask if she wanted her husbands remains to be repatriated.  She sent a telegram to the War Department requesting that his body not be disturbed under any circumstances. Jane soon remarried, and she did not reply to any of the War Departments subsequent inquiries concerning the proper paper work to be completed.  So, the army contacted Jims father to sort it out. Edward Pigue took charge of the situation, and he came to Europe to see his sons final resting place for himself.  In July of 1921, he visited his sons grave and met with officials of the Imperial War Graves Commission, who assured him that the British government would care for the grave in perpetuity.  He agreed to leave his sons remains undisturbed, and he had the words "Gave His Life For Humanity added to his sons tombstone. 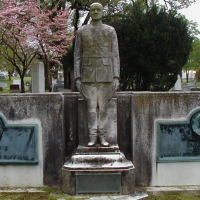 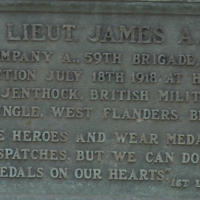 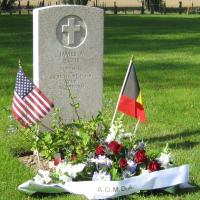 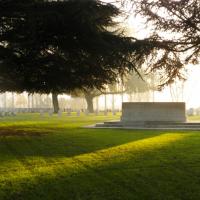 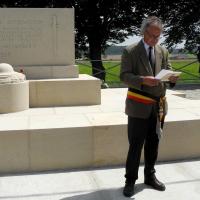 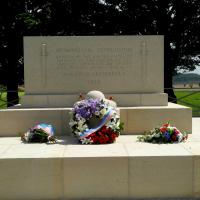 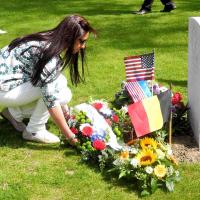