Adolf J. Vercruysse was born in Belgium on 9 June 1888.  He was the son of Alois Vercruysse.  He had a brother named Benoni who served in the Belgian Army during WWI.  He had another brother named Hilaire.  At some point, Adolf and Hilaire emigrated to America and lived in Chicago, Illinoi.  At the time that he entered the service, Adolf was living at 2311 Lowe Ave in Chicago.  He entered the service under the name of Adolph, and he was working as a laborer.  His brother Hilaire also served in the American Army during the war, but returned to Belgium following the war.
Adolf was a Private in the 318thField Remount Squadron.  This service, which was part of the Quartermaster’s Corps, was responsible for the horses serving the Army.  Although horse-mounted cavalry was useless in the trenches of the First World War, horses did play a crucial role in transporting supplies, weapons, and ammunition to the front.  The Western Front was a dangerous place, even for those who did not serve in combat roles.   In 1918, the Spanish Flu swept across the continent and claimed millions of lives by 1921.  In fact, more American soldiers were killed by disease in the First World War than were killed in combat.  Adolf was one of them.  He died of bronchial pneumonia on 29 September 1918, and was buried in the communal cemetery of Nevers, France.  Following the war, his father requested that Adolf’s remains be sent to Adolf’s brother Benoni, who was living in Zarren, Belgium.  Benoni buried his brother in the community cemetery of Houthulst, Belgium.
Information provided by Christopher Sims and the attached burial file. 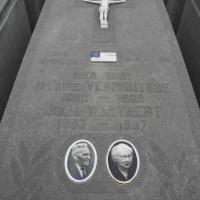 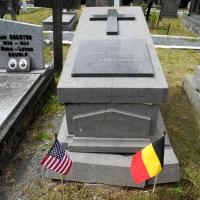