Visit a museum or monument

Whether you live in Belgium or are just visiting, there is much to see and do when it comes to remembering the sacrifice of those who died for the liberation of Europe. Visit one of the many museums that bring the past to life, or explore the countryside for memorials and monuments of interest.

There are dozens of museums dedicated to the First and Second World Wars in Belgium. Below are a few recommendations about museums to visit, or discover a list of monuments and memorials: 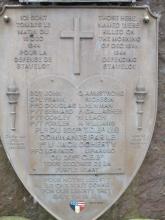 This monument is dedicated to the men of the 825 Tank Deystroyer Battalion who died in the defense of Stavelot during the Battle of the Bulge on 18 December 1944. 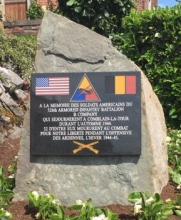 From October to 17 December 1944, Company B of the 526th Armored Infantry Battalion was quartered in the homes of families in Comblain-La-Tour.  The isolated grave of Joseph G. Farina is nearby.

Plaque erected by the Belgian veterans of Fort Eben Emael to Major Leland Lambe, who was killed at the Fort. 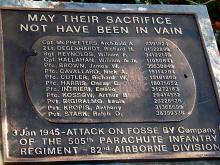 Monument to the 13 American soldiers of I Company who lost their lives in the liberation of Fosse on 3 January 1945. 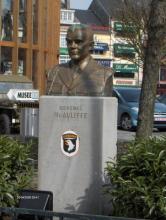 Monument to General Anthony McAuliffe, acting commander of the 101st Airborne Divsion during the Battle of the Bulge.

Located at the Mardasson Memoiral in Bastogne, this monument commemorates the men of the 101st Airborn Division who defended Bastogne during the Battle of the Bulge.  The sculptor was Robert Remacle and it was innagurated in 2008.  The sotry of Private Dennis McKeen inspired Remacle to create the sculpture.  McKeen is commemorated on the Wall of the Missing at the Ardennes American Cemetery.  See the Eagle Monument's website for more information. 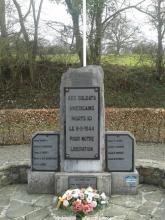 Monument to five American serviceman killed in the liberation of Limont 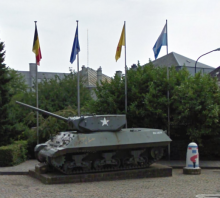